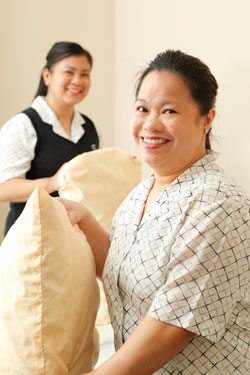 Mr Thompson is finding it difficult to manage at home so his family contact the ACAT team to arrange to have him assessed. He receives an assessment for both low care respite and low care permanent status.

Mr Thompson is unsure about whether he wants or needs to move into a facility permanently. He decides to enter Willowood as a respite resident to see if the facility is suitable for him.

After three weeks he feels pretty sure that he would like to stay permanently. After consultation with his family and the facility he decides to use the remainder of his 63 days respite before becoming a permanent resident. He uses this time in respite to ensure he has made the right decision and to get his affairs and finances in order.

After a number of years Mr Thompson has a stroke and is hospitalised. During his hospital stay he is reassessed as requiring high care. On his return to Willowood Mr Thompson moves into a high care room.

Mr and Mrs Jones live at home together. Mrs Jones has a fall and breaks her hip finding herself in hospital and then a rehabilitation facility.

Mr Jones has medical problems of his own and without having Mrs Jones at home is not able to manage himself. Both Mr and Mrs Jones are assessed as requiring low care.

Although the couple had originally intended to return home together they decide that it is best they move into a Willowood permanently. After six months Mr Jones’ medical problems escalate so that he requires high care.

When a high care bed becomes available he moves to that bed. Mrs Jones then moves to a single room in the low care area. In that way Mr and Mrs Jones remain under the same roof but receive the individual care needs they require.

There are five steps to follow when you think you or your family member needs to move into a residential aged care facility.
Read More